In my last post I tried my hand at using a TAP bag to custom bend and shape a skateboard to show form rather than function. I definitely had my struggles. The board didn’t laminate. The pressure let go and the layers didn’t glue together. Being rather stubborn however I refused to give up… This time I followed all the same steps except that I monitored the pressure in the bag. The pressure held without any issues. I left the board in the TAP bag for close to twenty-four hours.

The board looked like it was staying in better shape.

This time when the board came out of the bag it was in much better shape. The issues that had come from the previous board seemed to be lessened. The issue is there were still some gaps where the physics of stacking and bending wood forced a gap between the curved layers. After a few minutes out of the bag there was a noticeable increase in the space between the layers.

I think I found where the issue is; I think its the glue. It was still quite wet when I pulled the board out of the bag. I started to fill the gaps with high initial tack wood glue that I had from gluing my cruiser board together. Then I clamped the layers together. The clamps worked fairly well but I needed to add more. The problem is that I’m not at the shop so I’m limited to two clamps. I went to the web and found a possible DIY solution for a lack of clamps. Roarockit has an Instructable Blog about skateboard delamination. They mention the use of binder clips as way to press the layers back together. The pressure of binder clips is not as great as an actual clamp but it’s better than nothing.

So I glued and clamped as best I could. There are still some parts that are forced apart just by the physics of the bend in the wood but the combination of gluing and clamping seems like it will make this board salvageable. 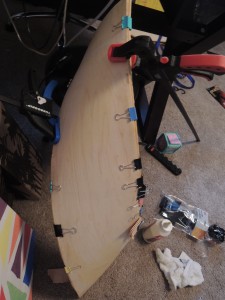 After a few days of gluing and clamping I think the core of the deck will be useable for my final project. I was  happy with the curve and the design. The next step was to take a few measurements and make a template. I used the same method of template creation that I did for my cruiser board. Once the template was printed I cut it out and traced the shape on to the concave side of the bend.

Once I traced it on to the deck I used the band saw to cut out the shape. Then I took it to the belt sander and cleaned up the edges. As I cut away some of the excess wood some of what I glued down was cut off and the boards underneath still had a bit of a gap. I filled the gap with wood filler in some places and a little glue in some places.

The next steps are mostly finishing. I took the deck home and hand sanded a few spots along the edge. To finish the skateboard I added a coat of varathane to gloss it up. Then I put on the grip tape. For a quick tutorial on grip tape application check out this video.

Once the grip tape was on I measured, drilled and installed the hardware (trucks, wheels, etc.). The final project has come together. I’m pretty happy with how this turned out after having a few setbacks.

Here is my Skateboard/Sculpture. I think this does a great job of illustrating my concept of a skateboard that is built for form rather than function. I think you still get the feeling of a trick while still creating a nice line and shape.

Check out what I've been up to: